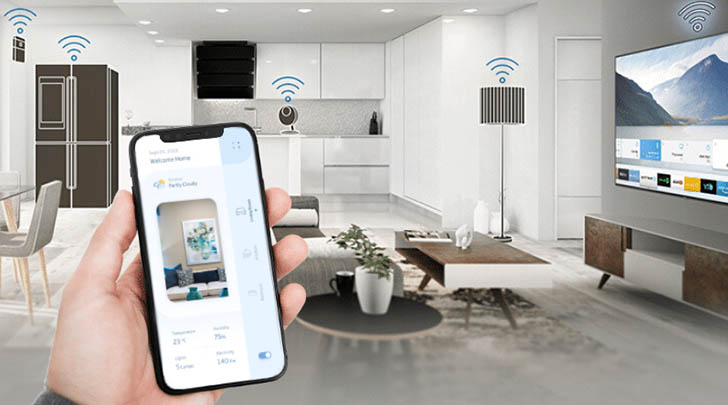 Samsung’s Knox Matrix is a private blockchain that provides secure information transfer between the company’s smart home appliances and your phone.

The recent company’s solution uses blockchain technology in a novel way on a very small scale. It could be a useful security measure as people make their homes smarter.

For the record, Knox Matrix-enabled home devices are only connected to a private blockchain, not any of the public ones associated with cryptocurrencies. As an alternative to cloud-based verification, it uses a local arrangement: The devices themselves scan for cyberattacks rather than requiring users to verify software online.

The Samsung Knox Validated Program: What Is It?

The enterprise framework, Samsung Knox, was created to provide advanced management and security for Samsung devices running the Android Enterprise operating system. In addition to managing device features, IT administrators can easily safeguard hardware against malware, data leaks, and theft.

MangeEngine Mobile Device Manager Plus, a Samsung Knox-validated solution, can take advantage of Samsung Knox’s cutting-edge features in addition to the extensive management and security offered by the Android Enterprise platform.

Devices that can support the Knox Matrix, which will start to appear in 2023, create a trust chain. Every device you own, such as a smartphone, TV, router, smart refrigerator, air conditioner, and washing machine, double-checks the functionality of the others.

The types of cyberattacks that big companies experience are unlikely to target someone’s smart home, but downloaded malware could find its way onto one device and spread through a network. Knox Matrix is intended to detect intrusions automatically and remove compromised devices to safeguard the rest of the system.

Samsung established a Threat Intelligence Team to monitor and identify new security threats to Galaxy devices and patch vulnerabilities to spot new varieties of malware and other harmful intrusions. The comparatively new team keeps an eye out for threats on the deep and dark web to look for hacking trends and other attack methods. For instance, the team noticed an increase in spyware and Trojan malware that leverages innocent messages to covertly install backdoors as more people shifted to remote work during the COVID pandemic.

How Blockchain Protects a Home

If you’ve been following the news about Samsung’s Knox security platform, you’ve probably heard about the company’s new “matrix” feature.

Knox is a cloud-based security service that Samsung uses to protect its smartphones, tablets, and laptops. Matrix is an extension of Knox that adds a public blockchain layer to your device, which means it can communicate with other devices on the same network and exchange data without leaving your home network.

It means that if someone tries to hack into your smart home devices, they have no way of knowing what’s going on inside your network. They can’t see what devices are connected or who they’re talking to because their private key encrypts the entire process.

If someone hacks into your smart home and tries to control your lights or thermostat, all they’ll see is gibberish — even if they somehow break through the encryption barrier protecting your devices.

How to Design a Garden That Is Good for the Environment

6 Important Tech Things to Add To Your Home

Top 4 Home Improvement Trends to Watch Out for in 2022

Sophia Rose - October 22, 2022 0
Whether you're a homeowner, a renter, or just thinking about purchasing a new home, there's always one thing you can be sure...

Sophia Rose - October 28, 2022 0
When the temperature outside begins to drop, people often reach for their thermostat to turn up the heat. This helps keep your...

Sophia Rose - August 13, 2022 0
Oakville is located in the state of Ontario, Canada. It is known for its natural beauty. The area is covered with dense...

Why do you need a Handyman Company in Peoria, IL?

Sophia Rose - May 12, 2022 0
A handyman is typically skilled at a wide range of skills like repairing, maintaining or installing things in people's houses or commercial...

Sophia Rose - September 27, 2022 0
Located less than 60 miles from downtown Hamilton in the Niagara Region, Welland is a cultural center; symbolic of Canada. This city...
© 2020 - All Rights Reserved - Smily Homes